When I was growing up, grilling was my dad’s thing. He’d go outside with a plate of raw meat and a little bit later, he’d come back in with a plate full of grilled meat. In the meantime, my mom and I camped out in the kitchen preparing the rest of the meal. What happened outside never really interested me. Even now, Jon does all of the grilling, while I sit on the patio and watch him, but I’ve never once asked him about the process of grilling or paid much attention to it. I just didn’t care… until recently.

A few weeks ago, Jon had surgery on his hand and I’ve had to take on more of the cooking. He picked out the meals for the week, one of which included grilled chicken and veggies. Gulp. You mean, I have to use that hot machine that lives on our driveway? Yup. And so I did, and it wasn’t so bad. Yes, it is hot- and that can be a bit scary, but I did it. I grilled the chicken and the veggies and didn’t burn either, and now I know how the grill works from start to finish. A man’s job no more!

Place chicken breasts in large bowl and cover with BBQ sauce. Place chicken on grill, turning occasionally, until cooked through (about 7 minutes). Brush chicken with extra sauce and cook a couple minutes more until sauce is slightly charred. Remove from grill and serve. 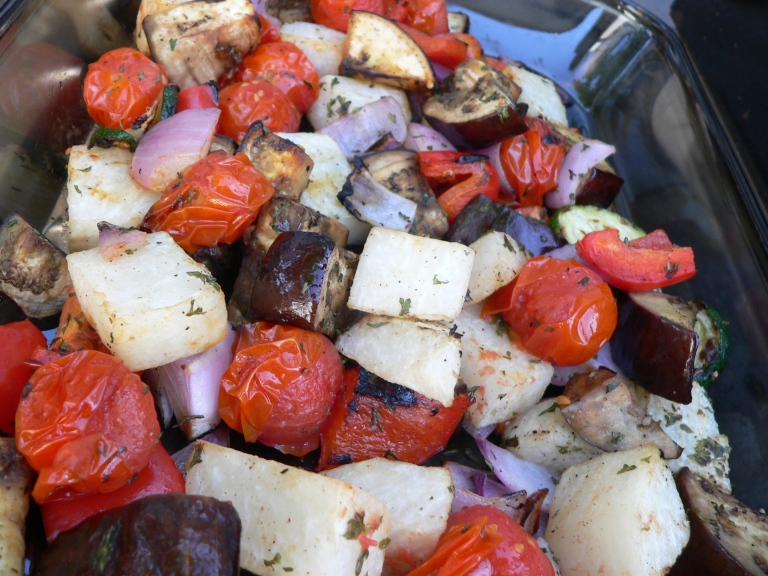 Finely chop the parsley with the capers and garlic. Add the oregano and peperoncini and chop everything together. Put the mixture in a bowl, stir in the oil, season with salt and pepper, and reserve. Add veggies and mix well. Pour in the vinegar.

Preheat an outdoor charcoal or gas grill or a grill pan until smoking hot. Put enough of the veggie mixture on the grill to cover it without crowding. Cook until well marked, 3 to 6 minutes, then turn veggies over. Cook until tender, about 3 minutes more. Remove the from the grill.