This past Christmas I purchased “Playing With Food” for Jon-  a cookbook produced by the Fort Wayne Philharmonic Friends as a fundraiser for The Phil. I love useful gifts that also raise funds for great organizations in our community. Have I mentioned what a gem the The Phil is? We try to attend performances as much as we can, though we don’t get there as much as we’d like. We especially love the Pops and Casual series. I urge you to check out their schedule <<HERE>> and make a point to get out and see a few performances. Personally, I cannot wait for The Music of the Police and Sting on October 29, Cirque De Le Symphonie on March 30, and Mozart: Revealed on April 27.

But I digress. So many people ask us, “Do you ever eat normal food?” And that often results in a heated debate between Jon and I as to what qualifies as “normal.” Growing up, I ate plenty of normal food. Mom prepared spaghetti, mac ‘n cheese, hot dogs, casseroles, and various dishes in the crock pot, and I am certainly not complaining; everything she made was good. Jon and I just don’t eat like that, and I try to use those dishes as an example when he insists that what we prepare is “normal.” So, in an attempt to create a normal dish, Jon turned to his Christmas gift and chose Goulash. “That’s normal, right?” We agreed, though, after reading the recipe, we had to add our own flair. 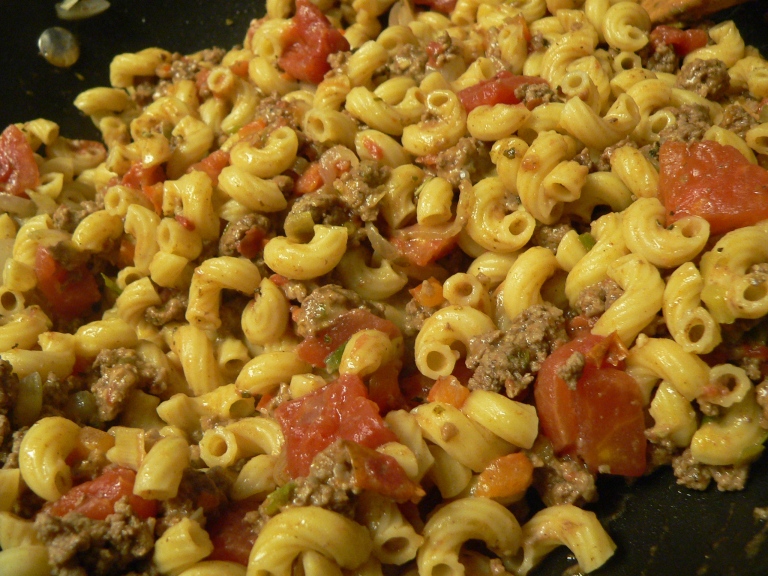 We also added oregano and Chinese 5 spice.
Preparation:
Sauté onion. Brown hamburger; drain off grease, then add sauteed onions and tomatoes. Add salt, pepper, oregano, Chinese 5 spice, and garlic to taste. Add cayenne pepper. Cook 30 minutes. In the meantime, prepare pasta to box specifications; drain. Add pasta to goulash and cook about an hour on low heat.
Side note: I used this website to figure out what kind of pasta we used. It’s so cute… and useful!

One thought on “Playing With Food- Goulash”